How Attitude Affects the Aging Process 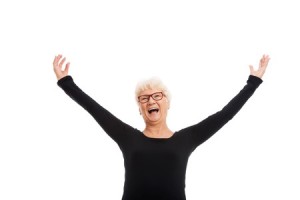 In our youth-oriented, media-dominated world, there are a multitude of myths about aging, and they’re deceptive in a variety of ways. Some lure us into thinking a magic cream or trendy style will restore our youth. Others lead us to believe we’re falling apart and powerless against the aging process.

We all know people who, as early as their fifties though sometimes later, start acting and looking older than their years; they complain of aches and pains, become set in their ways and have an obstinate outlook. Others attempt to look like teenagers, wearing age-inappropriate clothing and hairstyles.

Then there are those who are confident and comfortable with life’s changes, and manage to maintain a youthful demeanor and outlook without giving up their sense of maturity. These are the people who:

So what determines whether you’ll fall into the old-age trap, struggle to regain your youth, or enjoy your senior years with a youthful state of mind? Inner beliefs. We all have specific ideas about how we should behave at each given age, often based on behaviors we watched in our parents’ generation. Maybe we get to a certain age and just decide it’s time to slow down, or we start worrying that life could end at any moment. Sometimes our well-meaning families buy into that mindset, treating us as timid, close-minded people better suited to a rocking chair than a dance floor, ignoring our incisive observations about life and politics. This can be so dispiriting that we start to believe it ourselves.

What the Research Tells Us

There has been a great deal of research done on the aging process and how mental attitude can affect aging outcomes. Experts have come to some interesting and valuable conclusions.

In a series of experiments done by Dr. Becca Levy, associate professor of epidemiology and psychology at Yale University, in the mid-1990s, test subjects sat watching a computer screen as negative and positive stereotypical words flashed by so quickly that the participants couldn’t process them with their conscious minds. Immediately afterward, Levy asked participants to complete certain tasks. The results indicated that older people who were shown negative words performed tasks more poorly in comparison to participants exposed to positive words.

Another Levy experiment studied seniors (age 50 and over) in an effort to determine what aging stereotypes the participants believed to be true. During one project involving 660 seniors, researchers discovered that those believing in positive aging stereotypes actually lived 7.5 years longer than those who chose to believe negative stereotypes. They attributed this to those individuals having a “stronger will to live,” which in turn enhanced their ability to adjust to age-related life changes.

Not only that, they found that older people with a positive mindset tend to take care of themselves better. For example, they eat a more healthful diet, exercise regularly and get regular wellness check-ups.

Dr. Levy’s most recent research, a study that lasted from 1998–2008, tracked 598 people ages 70 and older. This study looked at the effect that aging stereotypes had on recovery from disabilities stemming from an illness or injury. Results showed that people with positive age beliefs were “44 percent more likely to fully recover from severe disability than those with negative age stereotypes.”

Research conducted by other experts affirmed Levy’s findings, and as more people discover this information, the power of negative stereotypes has diminished. According to Dr. Richard Suzman, associate director for behavioral and social research at the National Institute on Aging, one important finding from all the studies is that disabilities in senior citizens have declined. People have begun to realize that aging is not synonymous with disease.

In order for people to function well as they age, they need to change their perceptions about aging, as well as develop positive expectations. Researchers in many of the aging studies agreed that it’s important for older people to stay engaged in life. How each person will do that is unique, but whether it involves taking up a new hobby or physical activity, learning to play an instrument, reading on a wide variety of subjects or learning new technologies, it means above all keeping an open mind to life’s possibilities.