From the earliest stages of human history, man has existed in small groups. This was important to the  survival of the human race, and this and can be stated as one of the reasons why we have advanced this far. In fact, living as social groups is what our species has been designed to do and we depend on other members in the social group in our daily life. This is why humans are classified as “social animals”. For an individual to have a healthy and an enjoyable life, having positive and dependable relationships is a must. Without such relationships, our emotional state and physical wellbeing will deteriorate. Being around other people with similar interests can nurture learning and can give new experiences that are impossible to gain while doing the same thing by oneself.

Not all seniors who choose to live in senior living communities, retirement communities, or 55+ apartment communities do so only because they require extra assistance and care. Many residents enjoy the sense of activity and companionship that living in a community of seniors provides. 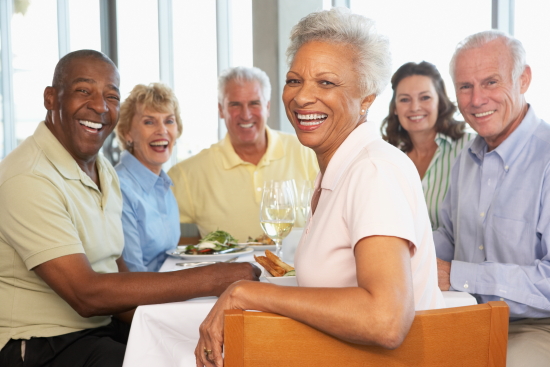 A large number of studies have been conducted on understanding how social engagement can benefit the elderly population.

One such study, conducted on 838 individuals with no reported case of dementia and having an average age of 80 years showed positive results. Their social network size, how they felt about the social support they received and how often they engaged in social activities were observed and assessed based on a linear regression model. These criteria were adjusted for the age, gender, education and other factors. The results from this study demonstrated that people with better social support were having healthier cognitive function than those who were not satisfied with the social support and social network they were associated with. The study also demonstrated that the size of the social network did not have a strong impact in the results.

According to a study conducted by the University of Michigan HRS, more than 26,000 Americans above 50 years of age were surveyed to measure how their social engagement influenced cognitive health.

Follow up interviews were conducted every two years. The results demonstrated a significant relationship between the mental state and memory of the individuals who were associated with social engagement. They did not show any decrease in cognitive health with time. Another study analyzed the data from the United States Health and Retirement Study, to determine the relationships between social engagement and benefits in aging. The results were quite similar to other studies and depicted better physical and cognitive functions in individuals with increased social interactions.

Most of these studies have focused on verifying the relationship between cognitive health and social engagement and they have found similar results. One group of researchers analyzed data from the Korean Longitudinal Study of Aging (KLoSA) to determine which types of social activities better benefit cognitive health in the elderly population. According to their findings, those who engaged in senior citizen clubs or senior centers and those who participated in two or more social activities were identified as having lower risks of cognitive disorders four years later. In addition, the participants who were in frequent contact with their children via telephone calls and letters also showed lower risks of cognitive disorders compared to those that did not. Therefore encouraging the elders to participate in social clubs and to have contact with their children as well as participating in social activities can show significant reductions in risk to cognitive health.

Our modern senior living community is designed to provide a range of activities and social events to provide residents with access to a dynamic collection of individuals which form a healthy social group. Residents form important friendships and genuinely enjoy a retirement experience among their peers. If you’re searching for a senior living experience in Los Angeles for yourself or a family member, please contact us to schedule a tour or learn more information about our community.