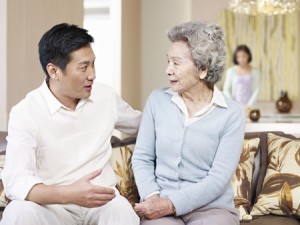 One evening when I was volunteering as a caregiver at a hospice home, it was clear that an elderly man would not survive the night.

His wife, daughter and teenaged grandson were with him as he began to fade. His daughter took me aside and said, “What happens if he dies tonight? And what are we expected to do? Do you need one of us to stay here, or should we leave?

His daughter looked worried. “I don’t know. We’ve never talked about it,” she replied.

She returned to his bedroom to discuss it with the family, only to come out 20 minutes later to say that he had just died—leaving the family with no doubt that he wanted them with him when he passed.

How to start a tough conversation

My conversation with her wasn’t unusual. So many individuals never talk about the care they want at the end of life because discussing death and dying makes them uncomfortable—or makes their loved ones squirm. Yet, as Benjamin Franklin once said, “Nothing can be said to be certain, except death and taxes.”

We all know we’re going to die. Why not just accept it and talk with our loved ones about the care we’d like to receive, whether it’s medical or spiritual.

Many times, it’s because we don’t know how to start a conversation that we know some people just don’t want to have. (Denial is more than a river in Egypt, you know.

If you’d like to move that important conversation forward, here are four tried and true ways to begin the discussion about end-of-life wishes, whether you’re the senior adult or the adult offspring or friend.

1. Use an end-of-life dilemma in a TV drama or movie as a starting point.

Legal and medical dramas are particularly good at shining a light on end-of-life situations where there isn’t a clear “right” or “wrong” answer. The ambiguity presented in many story lines opens the door for thoughtful conversations.

“Honey, did you see Grey’s Anatomy last night? I sure know what I’d do in that situation. I’d want you to…”

2. Draw from what others you know have done.

A friend’s death can trigger a productive conversation with loved ones. Use any information you have about the care the person received to open the door.

“Edith’s daughter told me they wish they hadn’t done chemo near the end. She thinks it interfered with her mother’s quality of life in her final weeks. It really got me thinking about what’s important to me.”

“I went to Edith’s funeral today. Her daughter told me that Edith had written down exactly what she wanted in certain medical situations, and that made it easier for the family. Let’s talk about what I’d like you to do for me if I can’t speak for myself.”

Eldercare consultant Joy Loverde recommends that the person who wants to discuss the topic start the conversation by talking about his or her own end-of-life preferences.

“Your parents don’t have the patent on going first,” says Loverde, who is also the author of The Complete Eldercare Planner: Where to Start, Questions to Ask, How to Find Help. When an offspring or younger friend appears comfortable with the topic, it can make what initially seems like an awkward conversation easier.

4. Use celebrity deaths as a starting point.

In today’s celebrity-driven culture, we’re often privy to details related to celebrity deaths, whether we like it or not. It’s not always a bad thing, though. For example, when former senator and presidential candidate Barry Goldwater died, his family released a statement that said, “He was in his own bed, in his own room, as he wished, overlooking the valley he loved with family at his side.”

No doubt this generated family discussions around the country.

“Dad, I hope it’s way off in the future, but when it’s your time to die, would you like to be at home if that’s possible? Have you ever thought about that?”

There’s no right or wrong way to approach the subject, but if you think about your preferences ahead of time, you’ll be prepared to take advantage of an opportunity when it shows itself.