Promising treatments on the horizon 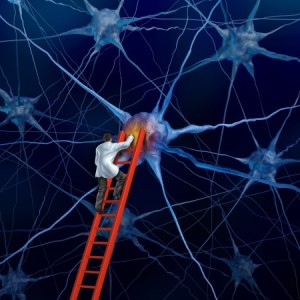 Ask seniors about their biggest fears and most will say either not having enough money, or having dementia. Researchers have made new discoveries that show promise for healing or preventing dementia, which might also help to relieve financial strain and the challenges of care, either in or out of assisted living.

The odds aren’t in anyone’s favor. There are an estimated 5.1 million Americans age 65 and older with Alzheimer’s disease, a statistic that’s expected to jump to 7.1 million by year 2025. But new findings could turn that number on its head.

Alzheimer’s is a degenerative condition believed to be caused by the buildup of plaque in the brain, which prevents communication between cells. Researchers have been trying to find ways to break up that plaque, but have been hampered by a seemingly impenetrable blood-brain barrier—tightly bound cells that protect the brain. Any invasive approach could cause damage.

Working with mice, an Australian team discovered that targeted ultrasound—the same technology used in viewing internal organs—stimulated a kind of cell in the brain called microglia, which works as the brain’s immune system, clearing dead cells and molecular debris. The ultrasound’s effect was to dramatically reduce plaque in 75 percent of the test mice, all of which showed improved performance on three memory tasks.

This new discovery comes on the heels of another possible approach to eliminating plaque. Late last year, researchers at Stanford University found that blocking the action of a molecule on the surface of microglia—a receptor protein called EP2 that has a strong potential to cause inflammation—allows the cells to do their job of clearing out debris. They just have to come up with a way to block that protein.

Potential costs and risks in the more complex human brain will take more research for both of these discoveries, but scientists are encouraged that there may finally be hope for Alzheimer’s.