Art offers many benefits to people of all ages, but especially for older adults. Whether you’re creating, viewing, or studying it, art can be a fulfilling and valuable hobby. Studying art history, in particular, can feel like being transported back in time, and it offers a glimpse into the social norms of any era.

As a senior living community in Los Angeles, Melrose Gardens understands that even the simple act of viewing art is good for your health, and we’re fortunate to be surrounded by many notable museums. In this article, we explore the impressionist movement. 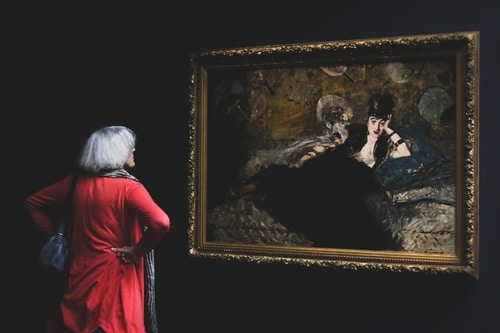 Prior to the impressionists, art in the 19th century generally portrayed historical, religious, and mythological scenes in meticulous detail and muted colors. Paintings were outlined, planned ahead of time, and brought to life in artists’ studios. They were highly polished, realistic, and rigid, and artwork largely existed as a form of documentation rather than personal expression.

When the impressionists emerged, they broke all of these rules. Rather than portraying historical events, impressionists chose to recreate images of everyday life and natural landscapes. They often worked outside, instead of in studios, so they could capture transient details as they saw them. In sharp contrast to the polished, planned works of artists prior, impressionists were spontaneous. They portrayed visual effects, like the movement of light, using visible brush strokes and concentrated, bright colors.

At the time, artists in Paris could only show and sell their work at a single, government-sponsored exhibition known as the Salon. The Salon rejected impressionist art due to its controversial nature, which eventually led to several impressionists creating their own exhibition in 1874. This was one of the most groundbreaking aspects of the impressionist movement.

Impressionist artwork had its admirers, but it was also heavily criticized for deviating so much from the socially acceptable style. To critics, impressionist art was unfinished, and comparable to sketches – called “impressions” – of established artists. This criticism was, in fact, what led to the movement’s name. Notable impressionists include Monet, Cézanne, Renoir, and Degas.

Through the ages, art has been used to document history, share different perspectives, stir emotions, and challenge the status quo. Artists, and their work, have also inspired many lively debates, discussions, and controversies. The impressionists are an early example of a provocative group of artists, who changed the meaning and purpose of art itself.

With dozens of art museums to explore, Los Angeles is an excellent retirement destination for art lovers. At Melrose Gardens, we encourage creativity and imagination as well as regular outings into the surrounding city. To learn more about our senior living community, contact us today.